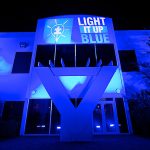 SUNRISE, FL– Chauvet is going blue to help fight a disorder that affects 1 in 68 babies born in the US every year, and the company, along with PLSN editor and noted LD Nook Schoenfeld, is hoping that other lighting industry members join in this effort. On March 30, the company lighted its headquarters in Florida, as well as its facilities in the United Kingdom and Belgium, a bright royal blue to kick off the week leading up to World Autism Awareness Day on April 2.

A longtime advocate of autism research and care, Schoenfeld was influential in getting the upper floors of the Empire State Building illuminated blue a few years ago as part of the “Light It Up Blue” campaign to draw attention to the disorder on Autism Awareness Day. “The organization Autisms Speaks came up with the idea of lighting landmark buildings blue on Autism Awareness Day to raise awareness of the disorder,” he said. “I’ve been a big supporter throughout.”

On a personal level, Schoenfeld has persuaded touring artists from Kid Rock to John Legend to turn their stages blue to raise autism awareness. This year, the LD/editor decided to bring the effort closer to home and involve the lighting industry directly.

“It seemed very natural to me,” he said. “As an industry we’re all about lighting, and this event is built on lighting. So I figured why doesn’t our industry light itself to raise autism awareness? I brought this up to some friends at Chauvet and they were all over the idea. Our hope now is that we can inspire the rest of the industry to join us in lighting their buildings for Autism Awareness Day on Thursday April 2.”

The Chauvet building is being illuminated in blue and displaying the Autism Awareness logo in gobo form, using gobos provided by Rosco Laboratories. “When we learned about this from Nook, we knew instantly that we wanted to participate,” said Berenice Chauvet, vice president of Chauvet. “Every year more families are affected by autism; so we did not want to sit idly by.”

To Chauvet’s point, the prevalence of autism among children in the United States has increased by almost 120 percent since 2000, according to the latest figures from the Center for Disease Control. This makes autism the fastest-growing developmental disability in the country.

“We’re hoping that by raising awareness, we can help raise funds for research and care so that one day autism will disappear,” said Chauvet. “Our hope is that many other companies in the industry join us in lighting their facilities blue this year. It would be nice for all of us to know that the lighting industry played a part in achieving this victory. So we hope everyone Lights It Up Blue on Thursday.”

World Autism Awareness Day and “Light It Up Blue” are sponsored by Autism Speaks. For more information visit www.autismspeaks.org