“We are very excited and honored to be able to directly serve our customers in a market where Chauvet’s brands are already known and valued,” CEO Albert Chauvet said. The Mexican branch office is the second international branch office fully owned by USA-based Chauvet, which also fully owns Chauvet Europe, based in the United Kingdom. In other countries, Chauvet products are distributed via a network of authorized distributors. 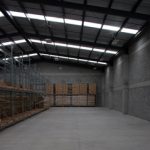 Abraham Levit, who owned Novelties and spearheaded Chauvet’s massive presence in Mexico for two decades, has been named general manager of Chauvet Mexico. Levit oversees a team of 12 and reports directly to International Sales Director Stéphane Gressier. “Abraham Levit and his entire team at Novelties built an impressive distribution operation for Chauvet. Joining forces with them will allow us to up the game by increasing performance and stock availability, in addition to offering superior customer service to our local clients who will benefit from a trained and dedicated team.”

Chauvet Mexico is strategically located at Ave. Santa Ana 30, Parque Industrial Lerma in Lerma, Mexico 52000, in close proximity to the airport in Toluca and to Ciudad de Mexico.

This entry was posted in News. Bookmark the permalink.