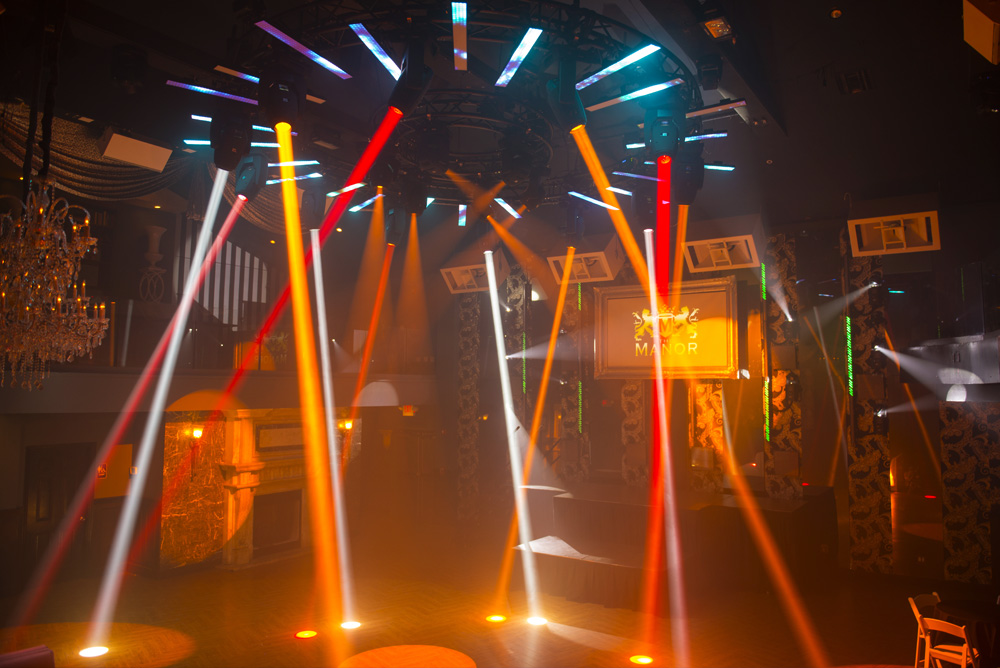 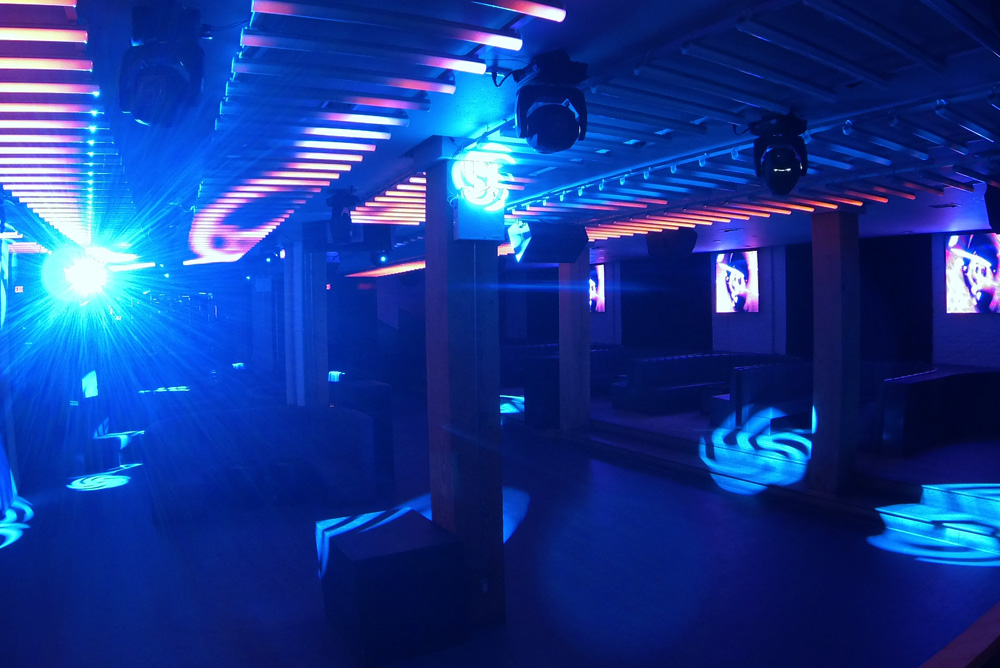 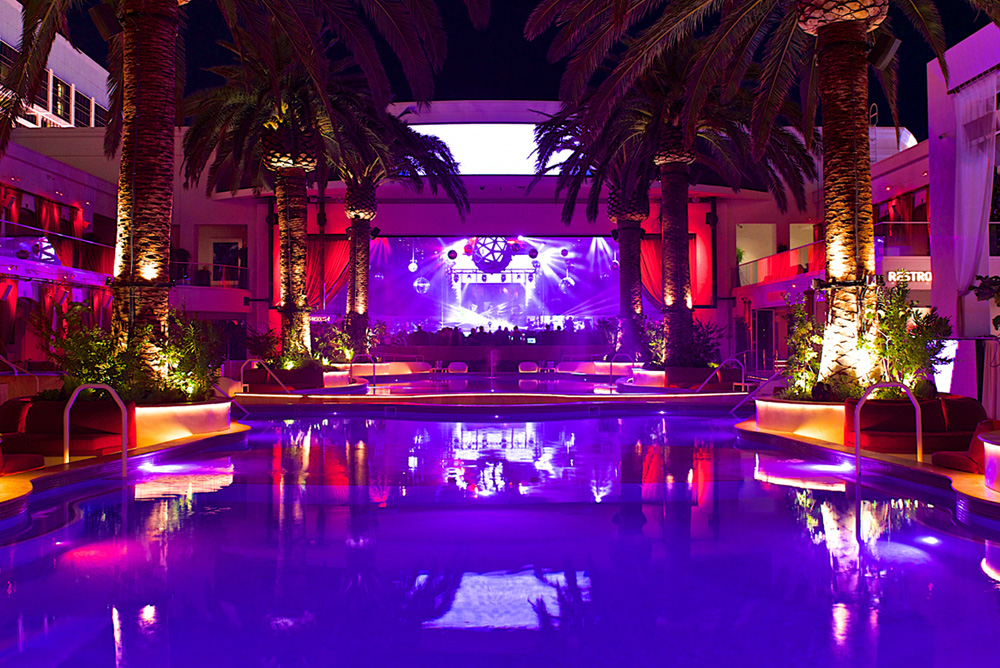 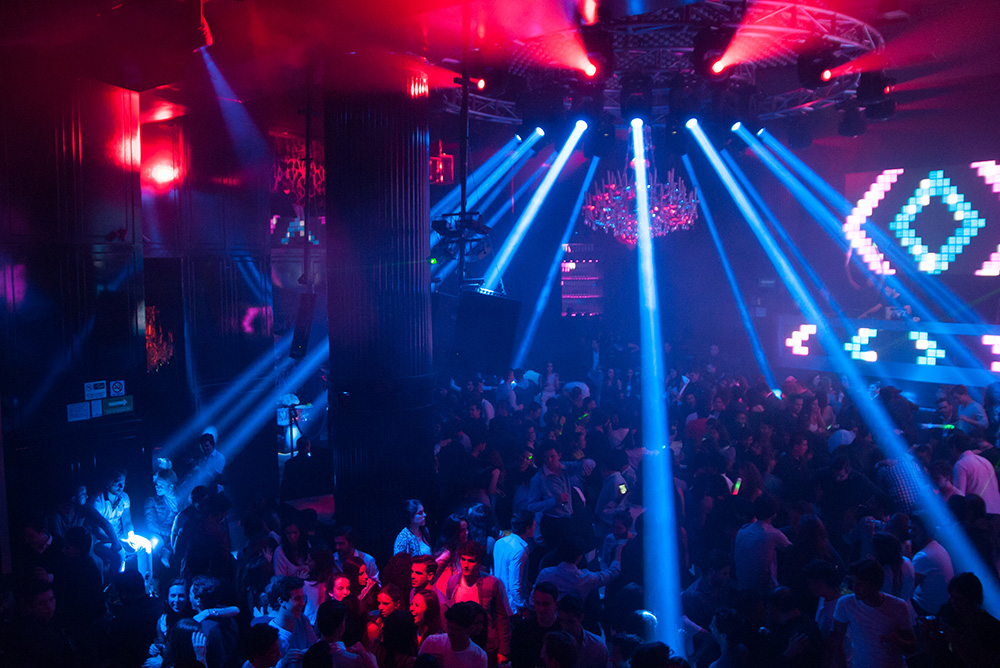 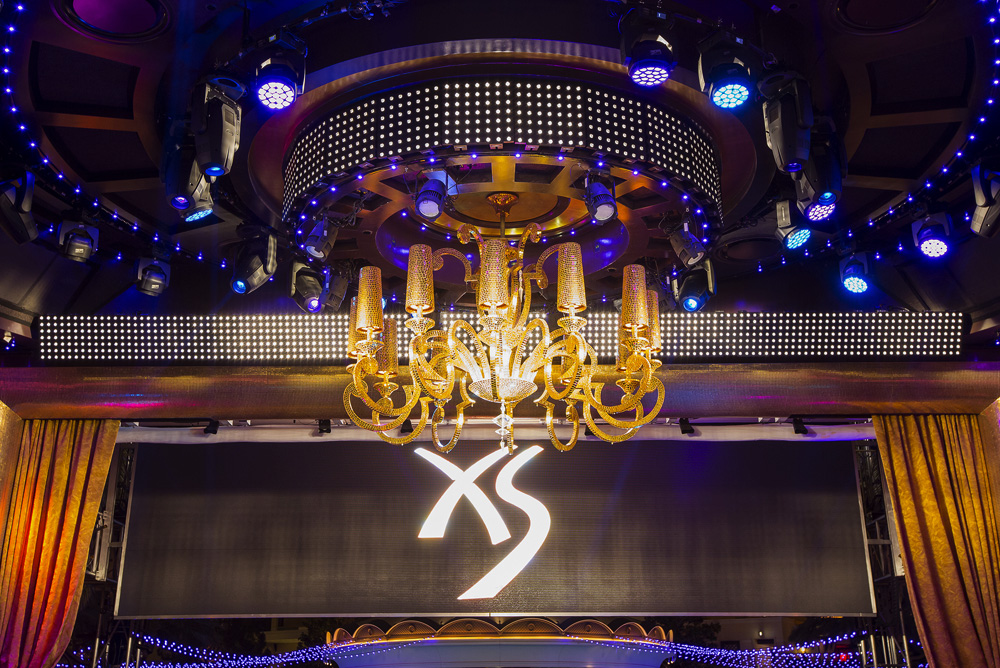 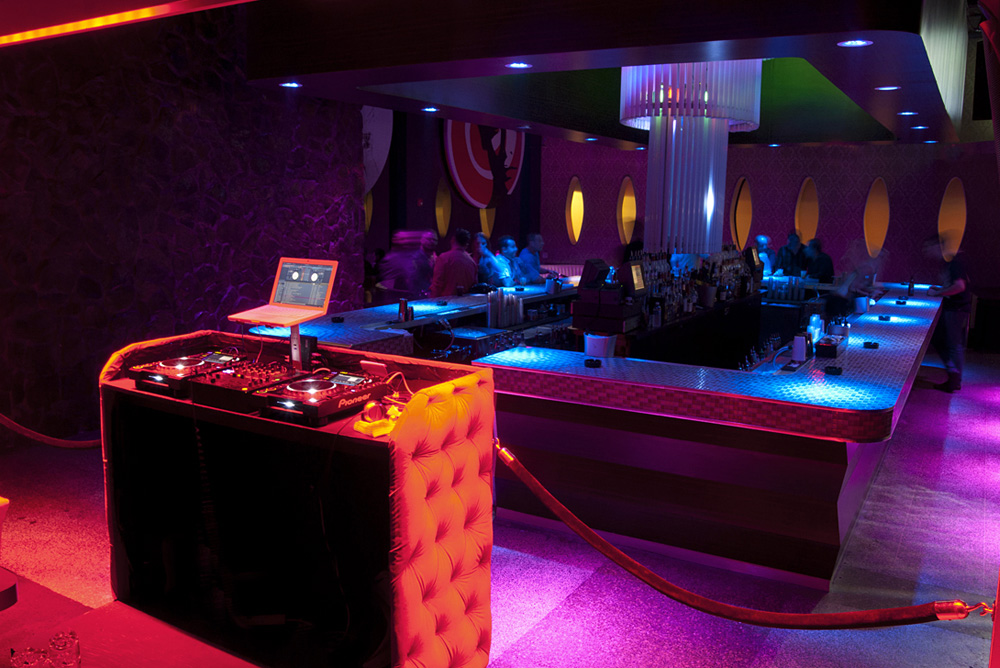 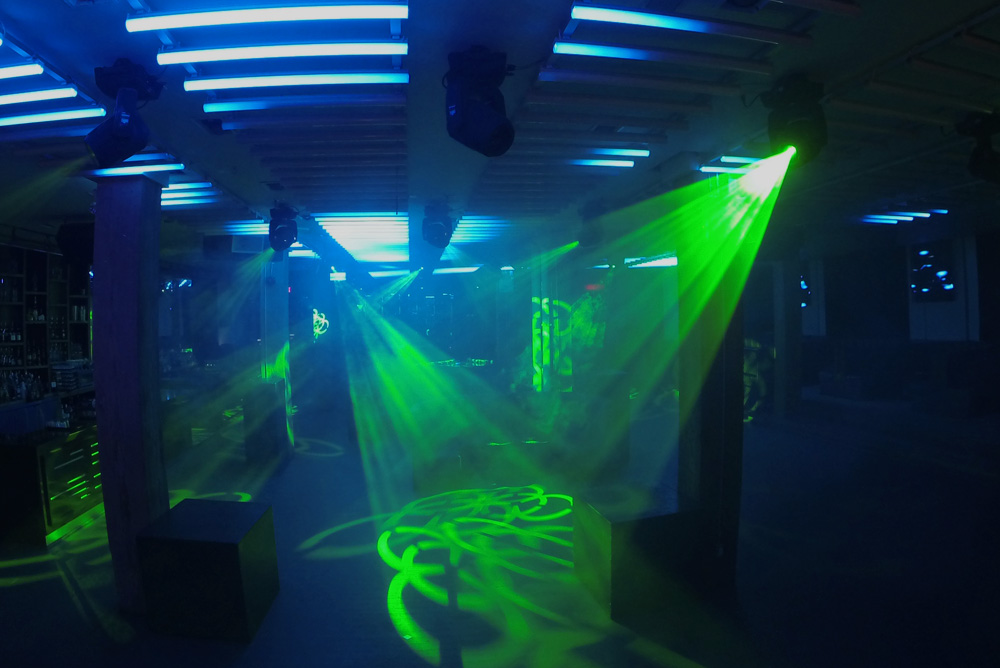 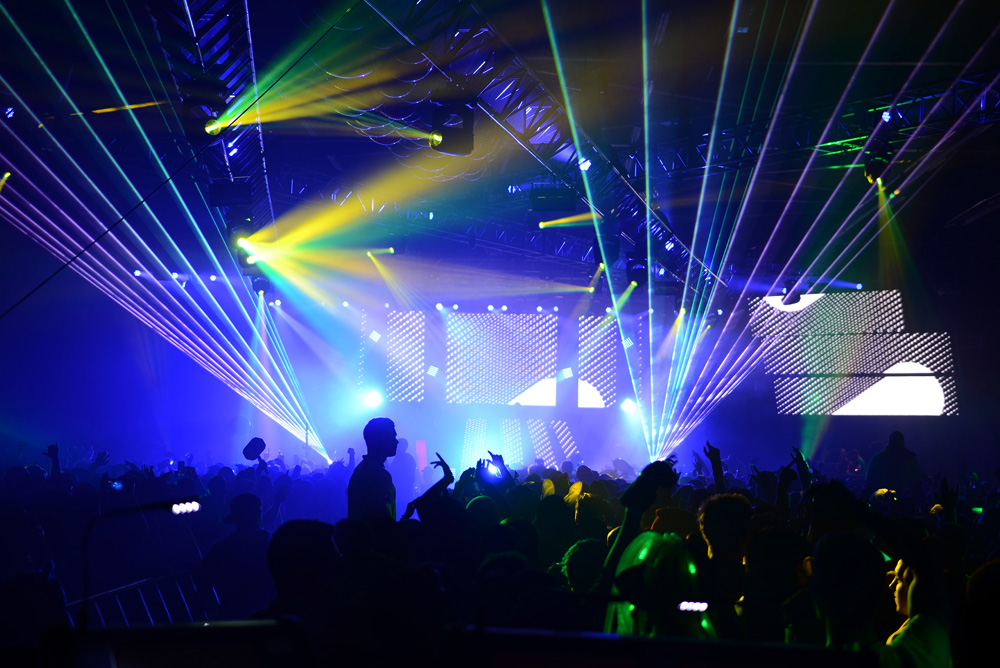 The Manor Complex is located about 32 miles north of South Beach, but the crowds that jam pack this spacious 20,000 square foot venue don’t feel a compelling need to journey south on I-95. Why should they? There isn’t much that can’t be found at this very well-appointed superlative nightclub that features a jolt of eye-popping new energy, courtesy of Rogue and ÉPIX Series fixtures from CHAUVET Professional.

The red hot Cinema club in Toronto’s hip Liberty Village isn’t located in a former movie theater. Instead, its creators chose the name because they wanted a club that exposed visitors to evocative visual scenes that “could only be brought to life on the big screen.” A good example of this design vision can be seen on the ceiling over Cinema’s second story dance floor, a unique metallic looking structure that houses 16 Intimidator Spot LED 350 moving heads from CHAUVET DJ. The dance floor ceiling resembles what LD Michael Meacham of iDesign (Miami), describes as “a low res VersaTube,” referring to the well-known metal building structures. A VersaTube look at an upscale, trendy nightclub? Yes indeed! Meacham dramatizes this surprising, power-packed visual image in his lighting design, much to the delight of the club’s owners and patrons.

The driving force behind some of the world’s most iconic clubs and the producer of movies like “Weekend at Bernie’s” and “The Man With One Red Shoe,” Victor Drai has an undeniable talent for turning dreams into reality. One vividly beautiful and exciting example of this ability is Drai’s Beachclub Nightclub, a magical vision come to life that was recently made even more compelling with the addition of artfully placed color changing fixtures from ILUMINARC.

With a population bigger than New York’s and a colorful street scene that never quits, Mexico’s capital lives up to its reputation as North America’s “Maximum City.” Everything is on full throttle here, including a vibrant nightlife that features countless world-class clubs. A crown jewel of Mexico City’s club scene is Hyde, a gathering spot for beautiful people from across the globe. Decorated with LED panels and color changing Swarovski candelabrums, the club makes a powerful visual impression. Recently that impression was ramped up even further by the installation of a new lighting system featuring 32 Rogue fixtures from CHAUVET Professional.

The creative force behind many leading nightclub lighting designs, Steve Lieberman of SJ Lighting was engaged to work his magic on XS and give the club a new, more technology driven look. He met this challenge with a bold futuristic design that drew on the pixel mapping power of the Nexus Aw 7×7 warm white LED panels and ÉPIX Strip 2.0 LED strips from CHAUVET Professional.

Lighting Designer, Michael Meacham of iDesign Miami placed color bars along the struts of the ceiling and pixel strobes in the corners. Then he anchored the design with 16 Intimidators, positioned in four in groups of four across ceiling. “We use the Intimidators to roll beams over the dance floor and the area around it,” he explained. “The beams are programmed in different zones to create some excellent dimming and scrolling patters, which results in a very deep captivating look.” A 75-watt LED moving head, the Intimidator Spot LED 350 features a motorized focus, rotating gobos, and a three-faced rotating prism, which together with the fixture’s high output make it ideal for casting crisp impactful images over large areas like the Cinema dance floor.

Manhattan’s Pier 94 has seen a lot of history pass through its 135,000 square feet of space since it opened in 1935 as an ocean liner terminal, but it’s doubtful that this venerable structure, which was later remodeled as an exhibition center, has ever witnessed anything quite like the Pier of Fear. Now in its third year, the two-day festival served up a spectacular Halloween treat for New York’s EDM fans with a stellar lineup of DJs, a colorful array of costumes that were definitely not picked up at Wal-Mart, and a brain tingling lightshow anchored by Next NXT-1 and Legend 330SR Spot fixtures from CHAUVET Professional.